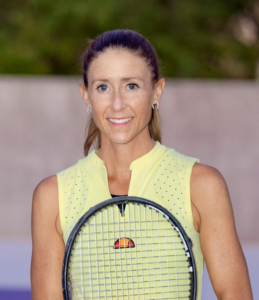 Leslie has been playing tennis since she was 3 years old, having grown up in a tennis family in rural Ohio.  From ages 8 to 18, she competed in junior tournaments, singles and doubles, in Northwest Ohio and elsewhere in the Midwest, and on her high school team for four years.  She earned a full scholarship for tennis to play for a Division-I college in Ohio and then Idaho.  Throughout her under-grad and graduate years, she taught tennis in local junior programs during the summer.

Before moving to the Phoenix area last June, Leslie lived in Houston, TX for 13 years.  She is a USPTA certified professional and Net Generation USTA coach.  She has successfully coached children from a young age into their high school years.  While in Houston, she spent 11 years running adult and junior programs at one of the largest tennis facilities in the city, Club Westside.  She then became the Junior Program Director at Lakeside Country Club where she revitalized the program after a natural disaster.

Since moving to Arizona with her husband in 2019, Leslie coached in both public and private Scottsdale venues, and directed a non-profit summer tennis camp during the pandemic for underserved high school students in the Phoenix Union School District.  While administering the tennis camp, she became increasingly passionate about creating a more encompassing program to help and elevate these hardworking, inspiring teenagers through the game of tennis.  Serve the Future emerged from the months of hard work dedicated to these young people and from a passion to continue this effort into the future.

USPTA Stars are certified professionals that have dedicated many years to volunteering in grassroots tennis while incorporating multicultural and inclusive aspects to bring tennis and good sportsmanship to the players they touch. Their giving spirits make them stars in their community.

For youths who are interested in playing competitively in high school an in the United States Tennis Association Jr Tournaments.  Serve the Future AZ is a registered NJTL (National Junior Tennis & Learning) network. We give students in underserved communities positive opportunities to learn and develop on and off the court.